Black Bloc: The legacy of the Kreuzberg Riots of 1987 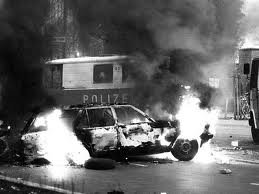 Black Bloc: The legacy of the Kreuzberg Riots of 1987

This week's episode of the Final Straw features a conversation on a divisive and spectacular tactic that for many outside of the movement defines what an anarchist is: the black bloc. We speak to a comrade who was present in the Kreuzberg district of Berlin on May Day of 1987 when thousands of autonomous activists (of the Autonomen movement of which our guest was and is a member) and erected burning barricades while physically resisting the state. This date is pointed to by many as the beginning of the tactic as it's practiced in it's modern form. We also talk about beginnings of the Autonomen, how it differed from other movements before and after, gender and class in the inflammatory May Day riots in Berlin and more.

This episode was made possible by the comrades at A-Radio Berlin who translated our questions, conducted the interview and sent us transcripts and even overdubbed the audio. Much thanks. Check out their project, as they do at times produce content in English, Spanish and French in addition to their work in German.

The playlist for this episode can be found here

This show will air from 3AM EST at 06/03/2013 through 06/09/2013. Podcasts can be found at radio4all.net (link pending the site coming back up). This show can be downloaded at archive.org. Archives of past episodes can be accessed at thefinalstraw.noblogs.org . To comment on this show or others, email us at thefinalstrawradio(at)riseup(dot)net

Uploaded by Bursts O&apos;Goodness on June 3, 2013